This month, let’s remember Eva-Maria Buch, from Charlottenburg in Berlin, a devout Catholic and linguistics student at the Humboldt University. Alongside her studies, she worked in a second-hand bookstore, where she encountered leftist thinkers, and members of various fledgling Resistance organizations. She began to translate for the anti-fascist group known as the ‘Red Orchestra,’ and provided a letter in French which appealed to forced-labourers to sabotage the bombs they were ordered to build. After others in her circle were captured, she fell into the hands of the Gestapo. Refusing to denounce others during her interrogation and subsequent trial, Buch was sentenced to death by guillotine at Ploetzensee Prison in Berlin on August 5th, 1943. On the morning of her execution, Buch wrote to her parents: ‘I am sorry that I could not spare you this most terrible grief!’ She was 22 years old. 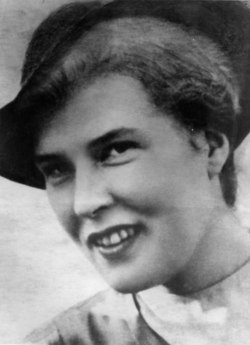