This month, I am thinking of Elise and Otto Hampel, a working-class couple who lived on Amsterdamer Strasse in the Northern district of Wedding. Increasingly disillusioned with life in Germany under Nazism, they began in 1940 to write postcards denouncing Hitler and discouraging Berliners from donating to the Party or signing up for military service, with simple texts such as: ‘Germans, awaken! We must free ourselves from this Hitler business!’ and leave them in apartment stairwells and other public places.

This seemingly-innocuous act of resistance sparked a two-year chase by the Gestapo, and the Hampels were eventually caught in 1942 whilst secreting some of their postcards in apartment buildings on Eisenacher Strasse in Schöneberg. They were both tried for ‘high treason’ and ‘undermining the war effort’ and sentenced to death. Both were executed by guillotine in Berlin’s Plötzensee Prison on April 8th, 1943. Their story inspired the novel ‘Alone in Berlin’ (Hans Fallada, 1947) which was adapted into an English-language film of the same in 2016, starring Emma Thompson and Brendan Gleeson. 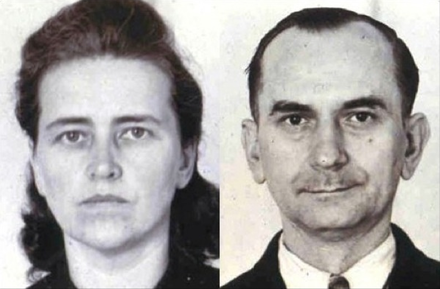